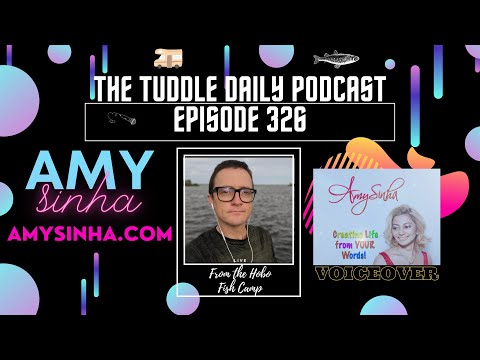 Tuddle has the lovely Amy Sinha on the show today. Amy is a Presenter and Voiceover Artist. Check her out at amysinha.com. Born in South Wales, UK, Amy, the youngest of three sisters, was submerged in m​usic from an early age. She entered her first talent contest aged six, singing “Somewhere over the Rainbow”, terrifying moments as she could barely reach the microphone. However, this also marked the beginning of her love of music and performance. Inspired by such a musical upbringing, Amy studied classical piano and singing, but also developed an intimate love affair with Jazz in her teens. A difficult and mature genre that touched Amy very deeply. Possibly because the complexity of this style reflected the events that were occurring in her life during the initial stages of her newfound developing passion.

Amy experienced some rare medical conditions in her early years, being declared as being one out of only 5 children like her in the U.K at the time. She had developed cataracts in both her eyes leaving her almost blind, and then diagnosed with a rare nerve condition which meant she was unable to feel hot, cold or superficial pain. Due to this nerve condition, she also developed Osteoarthritis leaving her almost wheelchair bound and caused her growth to stop completely.